Voice of the People in Uptown began in 1968 as families raised their voices in opposition to an urban renewal plan that would have leveled several blocks in Uptown and displacing 500 families. The families united to form an organization and named it Voice of the People. Voice stopped some of the displacement, found new homes for 250 of the 500 families displaced and, in time, acquired a number of the saved buildings.

Voice’s mission, which grew out of this history, was and is: 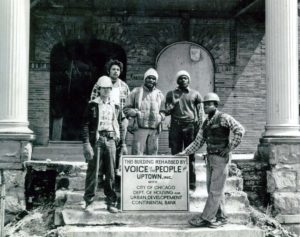 To work with families to promote and provide quality, affordable housing in Uptown and the surrounding area, and to maintain racial, ethnic and economic diversity; and

In 1972 Voice moved from property manager to both owner and manager when a local realtor donated a 34-unit rooming house to Voice of the People. Voice rehabbed the building located at 4927 N. Kenmore and converted it into six large apartments. (The organization had its office in the basement of this building until 1991.)   Over the next few years, Voice managed additional properties acquired through court-appointed receiverships.   The organization’s leadership learned that it is difficult to stabilize buildings owned by others with limited funds available for improvements.

In the 1980s, the organization pioneered “co-management” as a means of engaging tenants in the process of property management. Resident participation translated into formation of tenant councils, comprised of representatives from each of Voice’s properties. 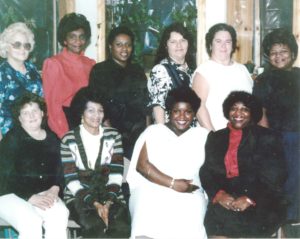 Grants received from the Catholic Campaign for Human Development helped Voice to mobilize tenants and allies in support of community development.

Voice organized, for example, the Task Force on Displacement and Housing Development, which highlighted the needs for creative financing for affordable housing in communities like Uptown.

Voice also became one of a select group of community-based housing development organizations in the U.S. to receive a HUD “Neighborhood Self-Help Demonstration Program” grant. This grant enabled Voice to create its Building Acquisition Fund to purchase, rehab and manage additional properties.

In 1983, Voice of the People rehabbed 4419 N. Racine which it sponsored as a coop with half of the residents paying market rate prices and half supported by Section 8 rent subsidies. Architectural services were donated and CETA provided training crews to assist the rehab. Voice later added the 24-unit 4416 N. Magnolia property to its portfolio of buildings, using syndicated, tax credit financing for the first time to facilitate acquisition and development.

In 1985, Mayor Harold Washington and Cardinal Joseph Bernardin dedicated a newly rehabbed property sponsored by Voice of the People at 4416 N. Clifton.

In yet another breakthrough, Voice was appointed as property management receiver for rents at the Moreland Hotel, paving the way for the creation of the Lakefront SRO Corporation. 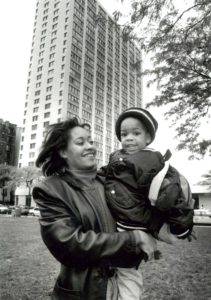 Lakefront SRO was a celebrated non-profit organization that used affordable housing and “blended management” to provide support services to the formerly homeless, persons with special needs or at others “at risk”. Lakefront SRO ultimately gave way to Mercy Housing, a major local and national provider of affordable housing.

Voice was the first community-based non-profit organization in Illinois to purchase a HUD pre-payment building. It forged a role that is relevant in the present day, where the organization serves as a resource for residents and others to preserve affordable housing, while not assuming a long term role in ownership and management.   As Voice of the People stepped back from this role, residents were paying no more than 30 percent of their income for rent. The project continues today under highly regarded management. 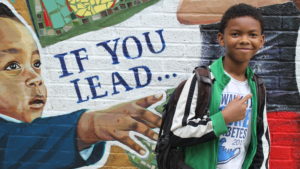 By its 25th year in 1993, VOICE had rehabilitated 15 apartment buildings and preserved nearly 700 units of affordable family housing, with the City of Chicago and the Department of Housing & Urban Development lending significant support.

In the years that followed, the VOICE diversified its approach to reinvestment and community development.

The FAC has been home to an array of programs and activities supervised and coordinated with Voice staff and tenant interns. The most significant program was “Student Zone”, an afterschool program inspired by volunteers’ experience with the Chicago Park District. Student Zone hosted arts and crafts activities, family and teen movie nights, chill out time, birthday celebrations, youth mentoring and more.

The FAC also is home to a computer room that doubles as a library, now called the Magnolia Technology Center. The Center for Higher Development provides faculty and trainers two days a week for computer education, safe gaming and homework help. Two additional community centers with computers and fitness rooms are also located in CCDC partnership properties. 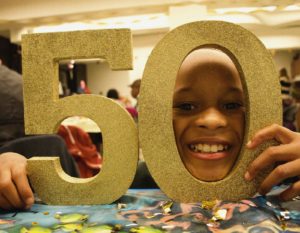 Voice began fifty years ago as an organized response to the displacement of hundreds of Uptown families.

The organization’s priority has always been to provide affordable housing, to engage residents in community improvement efforts, to empower people with leadership skills, and to connect them to community resources and services that can make for a better quality of life.

With the loss of thousands of Chicago’s affordable and public housing units in recent decades, Voice’s mission remains relevant and it is one of the few community-controlled corporations continuing to preserve low-income housing for the long-term.

Disinvestment and poor market conditions of the past have given way to gentrification and reinvestment activity in the present.  Even as the Uptown Community enjoys improved services and amenities, the viability of affordable housing is threatened by higher costs. Sustaining economic, racial and cultural diversity within Uptown is now more important than ever.

As of 2022, Voice of the People, with its partners and affiliates, own affordable housing and enable resident services at 14 properties with 214 leased apartments. Five of these buildings, with 22 units, are owned and managed by Voice of the People in Uptown as a not-for-profit 501c3 corporation.

Check out our videos about the diversity in Uptown, “How We Got Here”; see the Voice “Roots” video with alumni staff, leaders past and present; and, learn how the organization wants to “Make History” in our future.

A video of an award winning development follows below: